A Wakeup Call for PDP Burma

I received a rather crazy missive from the Parliamentary Democracy Party this week. It claimed that on 11-11-11 the PDP received a visitor from three astrologers. These three "seers," said PDP, received a visit from the spirit of the slain Burmese democracy leader General Aung San, father of Daw Aung San Suu Kyi. General Aung San's spirit ostensibly told them her daughter has "dishonour[ed] the revolution and my legacy, but my Higher Guardian Angles [sic] will not let her succeed." 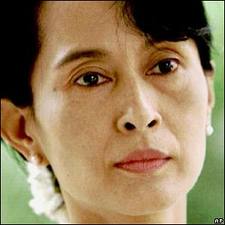 If this is the kind of nonsense it is spreading, the PDP has become a sexist, racist sham of a political party. To my Burmese friends, I say: Let's tell them we no longer wish to receive warmongering missives like this. Tell them they cannot speak for the spirit of Aung San, and it is preposterous to claim that they do so.

I became involved in the struggle for Burmese freedom and democracy because I wanted to help a loving and inclusive people break the chains of tyranny, bigotry, hatred, and usurpation of their human rights. I do not wish to be subjected to vicious, divisive, non-constructive diatribes, from the military thugs or anyone who purports to want justice, equity, freedom, and inclusive democracy.

PDP: If you have something to say specifically, come out and say it. Don't blame Aung San Suu Kyi simply for existing, or for attempting to find some way forward to a sustainable future for Burma and its beleaguered people.

Anyone who tries to build bridges can and will surely be accused of selling out one side or the other. I know from much experience that it is vastly more difficult to work toward understanding and cooperation than it is to stand rigidly on one's own side, unbudging, unyielding, and doomed to perpetual misery, violence, or subjugation.

Things change. We must be flexible to change along with the tides, and not drown for stubbornness because we refuse to move as the tide laps at our nostrils. Change is difficult. Democracy is difficult and messy. Getting along with others is hard; ask any kid in a playground.

I spent many years fighting against hatred, bigotry, and desperate suppression in Northern Ireland. Much of the ongoing violence was fueled by generations of people who could not relinquish their bitterness against one another's forebears or put aside their thirst for vengeance. This carried on for several generations, and it still lingers. Many, many people suffered and died because the sides could not find common ground. And that was in a country of only two groups divided by religion and economic power -- not nearly as complex a population as that of Burma, with its more than 100 ethnicities!

It is easy to become choked by acrimony and animosity. If we cannot find it in our hearts to look forward with hope, remembering and learning from but not dwelling on others' sins of the past, we will never find the way to a free, fair, just, and democratic Burma.

I hope, PDP people, that you can find it in your hearts to begin planning for a positive and inclusive future for Burma and its people, both men and women, and all ethnicities. The people of Burma deserve nothing less than your generosity of spirit; a long-term, far-reaching vision for the sustainable yet prosperous country Burma could be someday; and your willingness to work hard to ensure that it so becomes. And please stop claiming you or your friends speak to the dead. That's just wrong.

Maura Stephens
friend of the Burmese people
formerly with
the International Campaign for Freedom of Aung San Suu Kyi and Burma
Posted by MauraStephens at 10:55 AM