Stop the Disinfo: New York Does NOT Have a Ban on Fracking 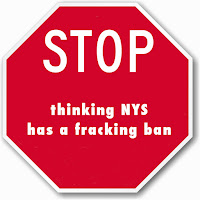 I would like to correct a serious error that, in its regular
repeating these days, is doing a lot of harm. I keep
hearing about New York's "fracking ban."

New York did not “officially ban hydrofracking [sic],” as I just read in a nice newsletter about sustainability. Nor did “the State DEC [issue] the final document needed to ban it.”

This misinformation has been spreading, causing people to believe they are now “safe” and need not spend any more time thinking about, let alone fighting, fracking. It is dangerous misinformation that has been picked up by all sorts of (irresponsible, gullible, lazy, or collusionist) media and should be challenged by anyone working for sustainability.

First of all, the term “fracking” is generally used by the many human beings who are fighting it (and other heavy industrial harms to water, air, food supply, and human and other species’ health) to mean all the processes involved in exploring, developing, extracting, disposing, storing, and distributing shale gas (so-called “natural” gas) via unconventional drilling, and all related industrial activities.

The Coalition to Protect New York and allied grassroots organizations use it secondarily but equally importantly to denote the “fracturing” of our health, environment, properties, communities, legislatures, media, and way of life by those who would usurp and abrogate our rights.

So, with that in mind, we’re being fracked badly. As FrackbustersNY wrote (and I cowrote) in December, and is still pertinent:
This is what DEC head Joe Martens actually published in June: "After years of exhaustive research and examination of the science and facts, prohibiting high-volume hydraulic fracturing is the only reasonable alternative."

True. A real prohibition on all fracking IS the only smart or reasonable thing to do.

But we do not have a real prohibition on fracking, not even if we forget about our definition. We have an extension of the temporary moratorium on one type of fracking: "high-volume hydraulic fracturing," that which uses more than 300,000 gallons per drilling operation, per the DEC. And I’d wager that was a very carefully constructed verbal smokescreen.

Low-volume horizontal shale-gas drilling has been done in NYS for years, and such fracking is not covered under this falsely named "ban." Other types of fracking for shale gas are in test stages, using lower volumes of water and/or other toxic substances including diesel fuel and other petroleum products. One would have to be hopelessly naïve to think that the fossil fuel industry would blithely comply with all so-called "bans" and regulations and not use every available option—of which they’ve been granted many by corrupt government entities—to get around them.

Let’s not forget that the fossil-fuel industry is exempt from numerous environmental safety laws (including the Clean Air Act, the Federal Water Pollution Control Act aka the Clean Water Act, the Resource Conservation and Recovery Act, to name just a few) as well as worker-safety regulations.

Further, DEC head Martens was interviewed in April by Susan Arbetter on The Capitol Pressroom radio show and actually admitted that the high-volume fracking ban would be "permanent until the information changes. . . . I don't think there's any such thing in the environmental world as permanent. Information changes. In this case, the health studies . . . may draw a conclusion that there absolutely is public impact . . . but they may find they don't need to use hydraulic fraking to reclaim . . . " [3:23-4:52]

Even more immediate, we should all be alarmed that the proliferation of fracking infrastructure and other fossil fuel infrastructure continues at breakneck pace:
I’ve probably left out some things . . . but this is what’s going on while people are being lulled into a false sense of security on fracking in New York State.

So PLEASE let’s not continue propagating this misinformation!

All those who care about climate and the negative effects of the continuing use of fossil fuels must vigilantly continue the fight against fracking, even as they continue all the positive work they're doing to keep our planet habitable for our and other species.
Posted by MauraStephens at 2:18 PM

WHAT DID THE FIRST CHRISTIANS BELIEVE? BY STEVE FINNELL

THE CHURCH OF CHRIST HAD ITS BEGINNING ON THE DAY OF PENTECOST 33 A.D.. WHAT BELIEFS AND ACTIONS DID THE THREE THOUSAND CONVERTS TO CHRIST HAVE IN COMMON? DID GOD APPROVE OF EVOLVING BELIEFS, DIFFERENT REQUIREMENTS FOR SALVATION? IF THAT WERE TRUE, THEN WOULD IT NOT BE FOUND IN THE NEW TESTAMENT SCRIPTURES?

Acts 2:41 So then, those who received his word were baptized; and there were added about three thousand souls. Acts 2:47....And the Lord was adding to their number day by day those who were being saved.

1. Acts 2:22 Men of Israel, listen to these words: Jesus the Nazarene, a man attested to you by God with miracles and wonders and signs which God performed through Him in your midst, just as you yourselves know---

All three thousand believed Jesus was a miracle worker.

2. Acts 2:31-32 he looked ahead and spoke of the resurrection of the Christ, that He was neither abandoned to Hades, nor did His flesh suffer decay. 32 This Jesus God raised up again, to which we are all witnesses.

All three thousand believed in the death, burial and resurrection of Jesus Christ.

3. Acts 2:36 Therefore let all the house of Israel know for certain that God has made him both Lord and Christ---this Jesus whom you crucified."

All three thousand believed that Jesus was Lord and Christ.

4. Acts 2:38 Peter said to them, "Repent, and each of you be baptized in the name of Jesus Christ for the forgiveness of your sins; and you will receive the gift of the Holy Spirit.

All three thousand repented in order to have sins forgiven. (repentance meant that they made the commitment to turn from their unbelief and sinful lifestyle and turn toward God).

All three thousand were baptized in water in order to have their sins forgiven.

All three thousand received the indwelling gift of the Holy Spirit after they believed, repented, and were baptized in water.

5. Acts 2:40 And with many other words he solemnly testified and kept on exhorting them, "Be saved from this perverse generation!"

1.Peter did not preach that men were saved by grace alone.

2.Peter did not preach that men were saved by faith only

3.Peter did not preach that God had selected a few to be saved and that all others would go to hell.

4. Peter did not preach that water baptism was not essential to salvation.

5. Peter did not preach that Jesus was just one of many Saviors.

6. Peter did not preach that once you were saved, that you could continue in a sinful lifestyle and still be saved.

7. Peter did not preach that God did not have the power to give us an inerrant translation of the Scriptures.

8. Peter did not preach that God would provide hundreds or thousands of different Christian denominations, and that they would teach different ways of being saved.

9. Peter did NOT preach that you had to speak in tongues as evidence that you were saved.

AS BELIEVERS IN CHRIST, MEN SHOULD USE THE BIBLE AS THEIR GUIDE FOR SALVATION. Looking to man-made creed books, Bible commentaries, denominational statements of faith, and church catechisms, is looking in all the wrong places for the absolute truth!